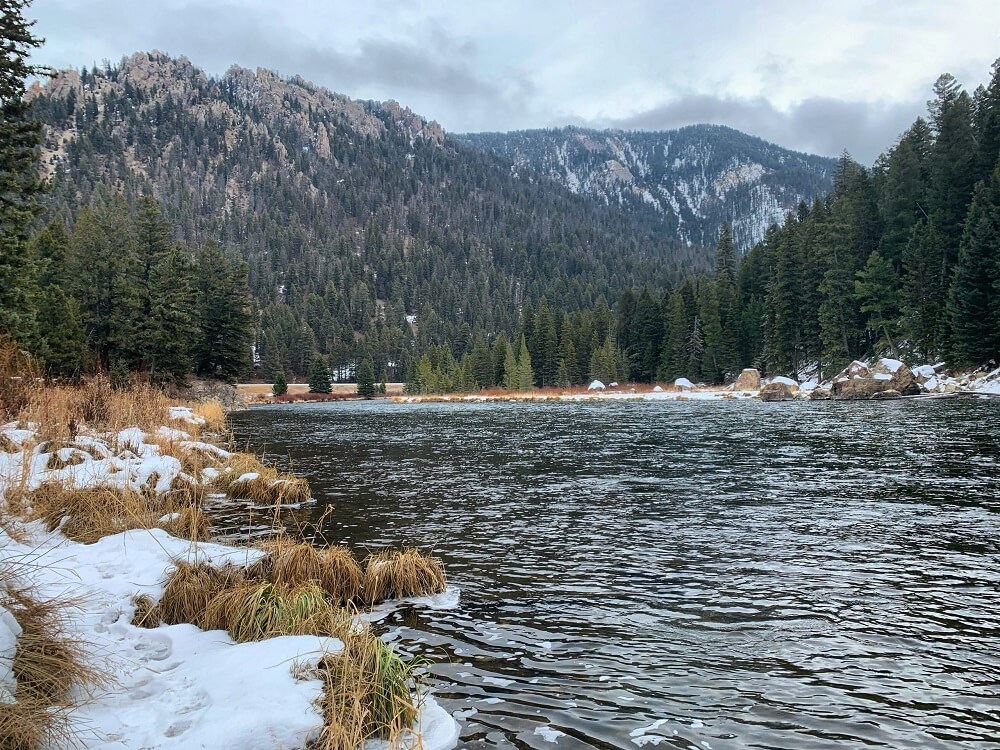 The Upper Madison has been fishing well this November, and after a nice couple of weeks with relatively warm temperatures it appears that Winter has finally settled in.  It’s about that time anyway, and we were fortunate enough to have some 50 degree days in November after one of the coldest Octobers anyone has seen around here in a very long time.  That said, the upper portion of the river will be your best bet from here on out and it’s going to be a little icy down by Ennis for a bit unless we get on another warming trend.

Nymphs are still the way to go, and we’ve been sticking to smaller midge larva and pupa patterns such as Zebra Midges, $3 Dips, Jujubee Midges, and other similar patterns in the #18-#20 range. Although BWO’s are done for the rest of the year we are still picking fish up on nymph imitations– Hare’s Ears, PT’s, Princes, and Small Pat’s Rubber Legs are also a safe bet for late Fall & Winter fishing on the Upper Madison.  Finding out where fish are holding is usually just as important as what fly you are using this time of year, if not more so. When water temperatures begin to fluctuate in the mid to upper 30’s, look for trout to move into slower water along the edges and into the deeper holes where they don’t have to expend a great deal of energy, and don’t waste your time out in the faster pockets.

If you’re more interested in throwing dries, there have been fish rising to midges from late morning through the early afternoon hours between Quake Lake and Lyon’s Bridge, but the hatches are far more inconsistent than what we will see from late December through early March.  If you do encounter rising fish, a Goober Midge, Hanging Midge, or CDC Midge adult in #20-#22 will get you into them along with a good drift.

Streamer fishing has been fairly decent as well over the last several weeks, with some very nice browns coming to the net on a variety of articulated creations.  Profile has been just as important as color lately, with thinner patterns like Peanut Envys and Double Screamers coming more into play more on the colder days.  Larger profile flies like Dungeons, Silk Kitties, and Double Deceivers have also been doing some damage out there, particularly early or late in the day but also on warmer afternoons too.  Keep your retrieves on a slow twitch or jig, as we haven’t seen too many fish chase hard since the last cold front came in.  If it does warm up again though, we’ve had no issues with fish willing to chase on 1′-2′ strips.

There are also quite a few fish spawning out there these days, and plenty of redds throughout the entire river. Please watch out for any cleared gravel you encounter and remember to never walk directly behind spawning redds as most of the eggs usually wind up 3′-15′ below them.